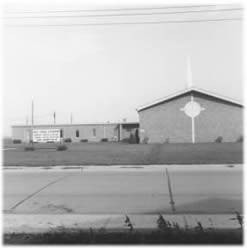 Holy Cross Lutheran Church was formed in 1965 as a mission start on the east side of Beatrice with the encouragement of members from the larger American Lutheran Church congregation, St. John Lutheran, Beatrice.  Several of the charter members remain active in the congregation today.  The first worship service on October 10, 1965 was at the Lincoln School, located just down 19th Street.  Holy Cross was officially received into the ALC on January 19, 1966.  The church building was dedicated at the current location later that year. In 1988, Holy Cross became part of the newly formed Evangelical Lutheran Church in America. In 1998-1999, a partnership with Trinity Lutheran Church, Beatrice was formed with shared pastoral leadership until 2004. 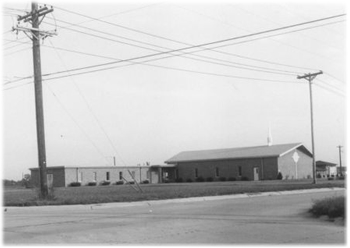 Serving Christ is at the heart of the people of Holy Cross.  As part of the 50th Anniversary celebration in 2016, as the congregation looked toward the next 50 years, the anniversary funds supported Bethany Walker, a former member of the congregation, called to the Ministry of Word and Sacrament and attending Luther Seminary, St. Paul, Minnesota.  Holy Cross has been privileged to have several members enter the theological field. Sons and daughter of the congregation are Pastor Ron Drury, Pastor Peter Jacobsen and Pastor Mary Jorgensen.
Holy Cross is church together with all the congregations of the Nebraska Synod ELCA and strongly supports the Synod, serving arms, and ELCA Churchwide ministries through our giving to Mission Share.  The people of Holy Cross continue to actively serve through ministries in our community and around the world.

KEEP UP WITH HOLY CROSS